I’m not sure whether we’ll get around to making another Halloween Zombie Graveyard Cake this year, but if we do, this technique for making realistic grass from coconut flakes looks like a much better way to go!

One of our family traditions is visiting Hershey’s Chocolate World over the holidays to take the free chocolate tour, gawk at the huge holiday chocolate house, and generally overdose on cocoa. We visited very early this year while the house was still under construction. This bad boy is being decked out with over a ton of chocolate! 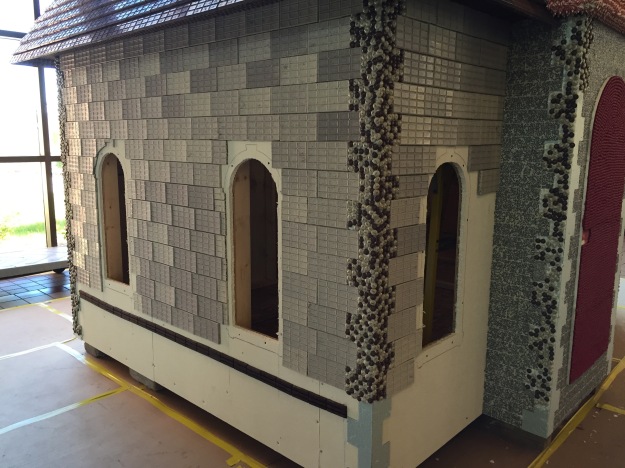 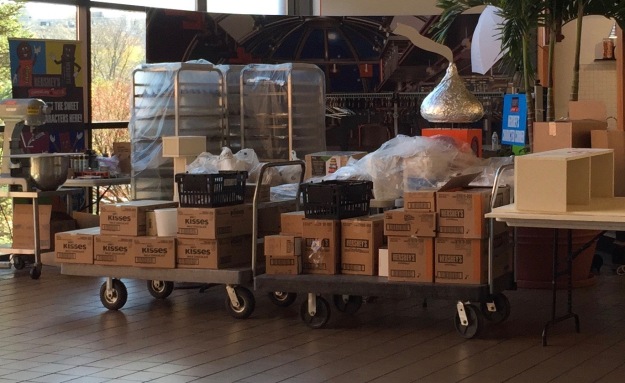 Unfortunately, we never made it back again to see the final build. We’ll have to settle for some Instagram pics and a time-lapse video of construction. I like to imagine that they let the Hersheypark’s ZooAmerica animals feast on the chocolate after deconstruction, but I’m sure it goes against their diets.

Time is running out to see this year's #ChocolateHouse! Visit now through 1/1/16 to see the sweetest house in #HersheyPA. While you're here, don't forget to donate $1 to support #CMN through our Candy Canes for Kids program!

A photo posted by Hershey's Chocolate World (@hersheyschocolateworld) on Dec 28, 2015 at 9:01am PST

Last year we made a Halloween Zombie Graveyard Cake. While I’m not sure that we’ll make one again this year, one thing I would change is the grass. Instead of using green icing for the grass, I’d use coconut flakes dyed with green food coloring. I think it would look much better and taste great, too!

We hope you enjoy our zombie graveyard cake video that we’ve made to get into the Halloween spirit. We’re especially proud of our two favorite zombies, Skiff and Spratt, who knock their breakout roles out of the park. Now go bake some cake! 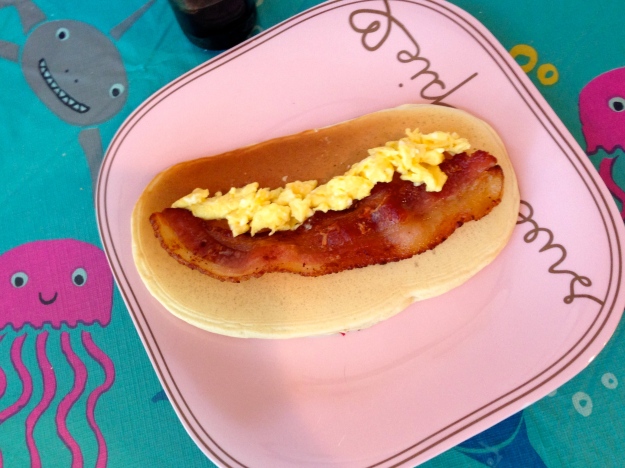 Are you prepared for National Hot Dog Day, this Wednesday, July 23rd? We sure are! While serious hot dog aficionados will have lunch and/or dinner covered, only the most hardcore fanatics would consider breakfast as part of the festivities. Frankly, we’re not THAT hardcore–but we’re close. Here’s our way of kicking off weeny day with a winning breakfast. Just cook up some pancakes in a rectangular shape (the bun), drop on a slice of bacon (the frank), and top with scrambled eggs (the mustard). Top it off however you’d like (maple syrup and chili sauce are optional), eat as is, or fold it up just like a real hot dog. 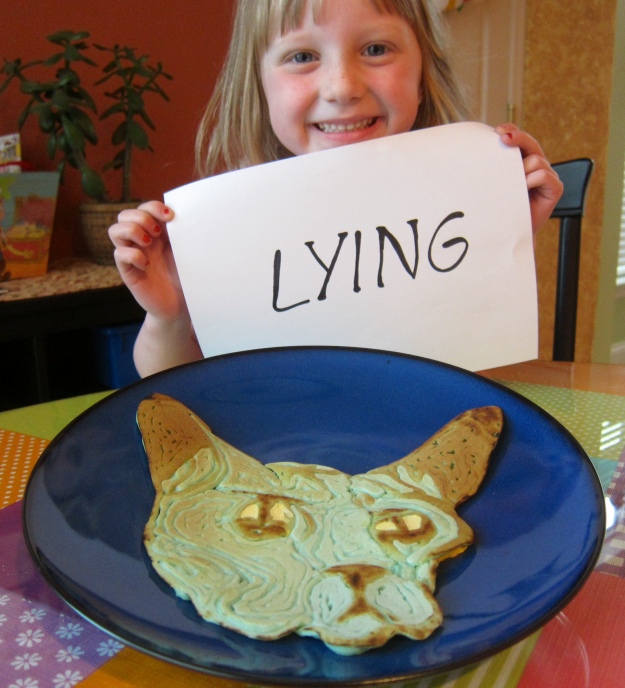 Lying Cat is a character from the comic book Saga, published by Image Comics. It’s a great ongoing book written by Brian K. Vaughan, with art by Fiona Staples. Definitely worthy of checking out – and I’m not lying! The “R” rating means it’s off limits for my kids, though they sure do love both cats AND pancakes! I submitted a photo of this pancake to the monthly fan art section of the Saga (unofficial) Facebook fan site.

To make the pancake, I whipped up some batter, added some blue dye, and filled up my wife’s cake decorating squeeze bottle. Start with the areas you would like to turn out the darkest, then just fill the rest in. If you think that’s cool, check out Jim’s Pancakes for some SERIOUSLY over-the-top pancakes. I need to take some pancake making lessons from this super cool dad! 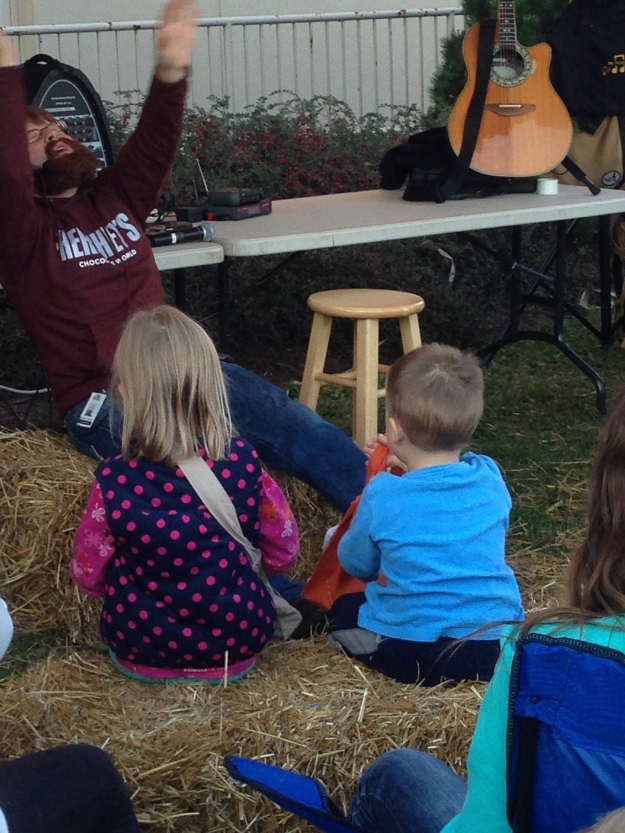 My family had a blast at Hershey’s Chocolate World last weekend. We went for the S’mores Campfire Party, an outdoor event held every fall at Hershey’s Chocolate World. This year it lasts from October 15-November 3rd. It’s chock full of fun activities like live music, scary stories, and of course, a bonfire for making s’mores. Best of all, admission is free (s’mores kits cost $3, which also includes hot cocoa or chocolate milk).

During the entertainment, the kids had front row seats atop hay bales, while camp chairs were scattered about for parents. My kids loved making the s’mores, although to our surprise, they didn’t want to eat any their hard work! Instead, they ate the graham crackers, marshmallows, and chocolate individually.

Inside Chocolate World there were even more activities, including the free Trick-Or-Treat Adventure. Children 12 and under receive a candy bag and have to make their way around to a few scattered stations. Costumes were encouraged, but not required, which was great because we hadn’t come prepared anyway.

Of course, no trip to Chocolate World is complete without taking the tour ride at least once. This has become one of their absolute favorite things to do. My son is such a Chocolate World fanatic that he randomly yells “Chocolate World!” whenever he gets excited, in place of more standard cries of joy, like “hooray” or “yippee”.

Upon exiting the tour, we came around behind the cookie shop (another one of our ritual stops) which overlooks the kitchen area. While peeking down into the magical cookie baking area I noticed an infographic intended for employees. 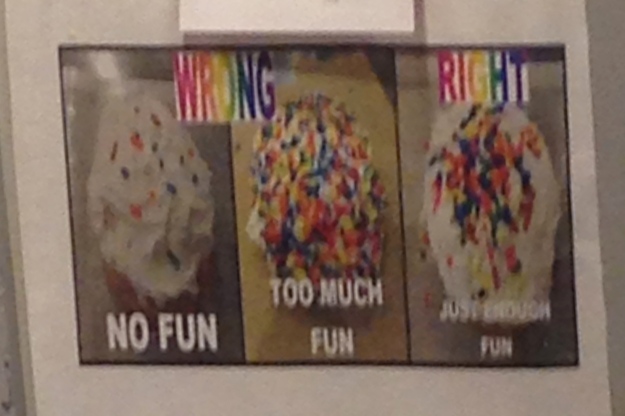 With some closer inspection, and with the help of my camera zoom, I saw that it was a guide to coating cupcakes with sprinkles. “Too much fun, not enough fun, and just enough fun.” My wife and I thought this was pretty cool, even though we strongly disagreed with the general premise of the poster. I mean, how can you possibly have too much fun when it comes to a cupcake!? Can you guess which one my kids wanted to eat?

Over the last few years, my kids and I have dabbled in gardening. This season started on a nearly catastrophic note when severe thunderstorm winds launched our seed starter box off the patio table and into the air, sprinkling our seedlings across our patio.  These events rendered my hand-drawn diagram completely useless, and forced us to plant our seedlings in a completely random layout. We dubbed it the Garden of Mysteries.

Oh, well. All’s well that ends well. We soon had cucumbers, tomatoes, peppers, and a variety of herbs popping up everywhere. Some gardening highlights include making our first batch of real homemade tomato sauce, as well as some hot pepper relish from our cute little cayenne peppers. What we grew most obsessed about as the gardening season progressed were the sweet potatoes, even though my kids won’t eat them. I, myself, have been really enjoying eating sweet potatoes for lunch with just a some butter and cinnamon. Yum!

The kids have no interest sharing a sweet potato lunch with me, but their curiosity grew as we tended to the garden. This was due to the very quickly growing vines and the large mound that became the focal point of the garden, commanding any onlooker’s attention. We could hardly stand the anticipation, and dug into the soil when the leaves first began to yellow, a tell-tale sign the potatoes were ready to harvest.

We placed our bets on how many sweet potatoes we would find, and after taking turns loosening the soil, we finally pulled out this: 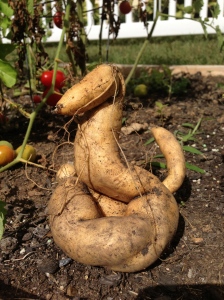 Now, I’m not sure whether it was something we did, or whether our garden was situated over an old meteor crash site that contaminated our backyard soil with alien matter. Whatever the case, this was the most freakish looking vegetable that I’ve ever seen! Not in the slightest does did it resemble the sweet potatoes that I had grown to love.

We brought them inside and set them on the counter, where they sat, untouched, for almost two weeks. It became a conversation piece, not to mention the butt of many bad jokes. We even debated the winner of a hypothetical Alien Sweet Potato versus Swamp Thing match.

The day finally came where my wife gave me an ultimatum (it’s me or the potato), and since I couldn’t work up the nerve to  prepare them in my normal manner,  I decided to try making something special and fun for the kids – sweet potato chips! One nice thing about the strange shape of these potatoes was that were perfect for slicing into small chips. I tossed them in olive oil with some salt and rosemary and baked them until lightly browned. Everyone, even the kids, enjoyed the sweet potato chips. 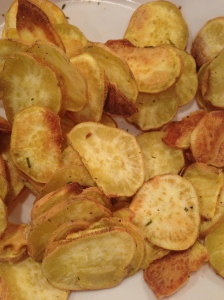 In the end, what started as the stuff garden nightmares are made of became a culinary miracle. The question is, can we recreate the same gardening magic next year?

I’m excited to announce that thanks to the team at Life of Dad, I’ve been selected as one of twenty-five official blogger entrants in a contest where the prize is (wait for it) breakfast with The Rock!

It is all part of the promotion of The Rock’s milk campaign, which you may recall from his 2013 Super Bowl “got milk?” ad. This hits home for us here at Secret Dad Society, where milk is king. Our kids’ favorite breakfast is milk and cereal, which is often the very first thing my little sleepyheads ask for every morning as we head downstairs. We’ve been fortunate that they haven’t caught on to sugary drinks, and that the sippy cups stay well stocked with water and milk all day long. With picky eaters, it is such a great way to get the protein my children need to fuel them throughout the day. It certainly helps fuel daddy as well! For more on milk recipes, tips, and other fun, visit The Breakfast Project.

I’m extremely excited to be a part of this contest. I can’t stop imagining what questions I’d ask The Rock in person, and how ridiculous I’d look standing side-by-side with him, especially since we sport the same hairdo. Then there is the fact that I’m undeniably short by average standards. Heck, I’m short even by middle school standards, so putting my tiny, bald physique next to The Rock would basically make me his mini-me. If he’s The Rock, I’d be the Pebble. Oh, and I can do quite the eyebrow arch to boot. Yes, it would be the utmost coolest experience indeed.

As a contest participant, I had to make an Instagram video showing how milk helps to make me a super dad throughout the day. It’s my first Instagram video and was so much fun to make. Please view my video entry here: Super Milk Man. Did you happen to catch the large cardboard castle fort at the end? A post about that is coming soon!

You can also view some of the other great entries by following #SuperMilkMan on Instagram, and don’t forget to follow @MilkMustache and @LifeofDadShow for even more milk fun!

All contest entrants are paid by Life of Dad, LLC to participate in this event. My children, however, are not paid to drink milk.

Chad Pitt is doing great! Had I mentioned I named it? The root is growing like gangbusters, currently measuring in at two inches. Now I’m just waiting for the top of the pit to split open and for the sprout to appear. I’m not very worried about that part yet as long as long as the root keeps growing like it is. It’s a real good thing I didn’t lose hope and trash him in mid-April!

Guacamole and Growing an Avocado Plant from Seed