The latest Cool Tools podcast has just been released, and I am extremely humbled and honored to be the featured guest. It was so exciting to speak about several of my favorite and most fun tools with hosts Kevin Kelly and Mark Frauenfelder. We discussed juggling balls, kite winders, a caricature drawing guide, and more!

The podcast is part of the fantastic Cool Tools web site, which features a uniquely wonderful tool each weekday. I love how the site focuses on user-generated reviews of tried and tested tools that people are passionate about.

In late 2013, Cool Tools: A Catalog of Possibilities, was announced. It’s a mammoth paperback companion book to Cool Tools, featuring 10 years of reviews featured on the site. Unable to ignore my enthusiasm about the upcoming book, my wife immediately pre-ordered it for me as a gift, and I’ve been happily perusing its giant pages ever since.

You can download the latest Cool Tools podcast to your device via iTunes, or listen directly from the Cool Tools website. 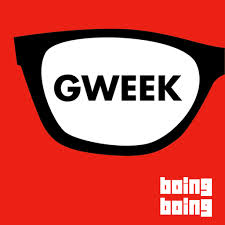 I am very excited to announce my guest appearance on the latest episode of Gweek, one of my long-time favorite podcasts from boingboing.net, hosted by Mark Frauenfelder and Dean Putney. My morning routine isn’t complete until I’ve had a few cups of coffee while perusing the latest posts on Boing Boing, and I never miss an episode of Gweek.

As an avid listener, I’ve often been compelled to run out and explore many a gadget, website, book, movie, graphic novel, or various other neat stuff recommended by Mark, Dean, or any of their interesting guests. It was a thrill to be a guest myself and share some of my own favorite things with them. I’d like to thank Mark and Dean for having me on the podcast. It was such a blast! You can read more details about it and listen here.

The other day my wife was shopping at the same location where we had previously spotted the real-life Teenage Mutant Ninja Turtle party wagon, when she serendipitously spotted it again! Can you believe it? Knowing that I would have loved to speak with the owner but had missed my chance, my wife took it upon herself to find this person and obtain his contact information. Do I have the coolest wife in the world or what? I promptly emailed Dan, the owner, who agreed to an email interview about his bodacious green machine. I’m so excited to share with you my first ever interview on Secret Dad Society!

Hi Dan!  So tell me why you decided to trick out your car? Was the decal just an afterthought or was it all part of the master plan?
Originally when shopping for a Scion xB I really wanted the first line of them put out in 2005. (The brownish copper limited edition ones). I wanted one of those so I could put decals stating, “fragile handle with care,” and “this side up,”  to make it look like a cardboard box. The green 2006 xB just kind of fell into my hand along the way while shopping for the other one. The moment I got the green one, I knew what I had to do. I looked to try to find the TMNT decal for months with no prevail. Finally, I decided to have it custom-made.
Do you have any customizations on the inside?
The inside has a DVD player with two screens, one in the back of each headrest, and there are neon green lights that line the floor of the car all around.
Do you have any other modifications planned?
I would like to get a red band around the middle of the car with a knot in the back that would wrap around all of the way to the head lights to form a mask. also in the back small windows I would like to get the faces of the turtles peering out.
How big of a TMNT fan are you?
I was a huge TMNT fan in my child hood. Growing up in the eighties who wasn’t? But I held on to that childhood fandom well into highschool, and even further, when most kids let it go as they got older. I couldn’t get enough. While in high school I started collecting the comics, both old ones and current ones, and they never left my side.
What do your friends and family think? Always asking for a ride or refuse to get in?
Everyone loves the car. Little kids point and stare at it as they tug at their parents clothing, trying to show them as I drive by. I get compliments on it at least two or three times per week. Friends love it. Even the ones who would never do it themselves say things like, “Oh my God, I can’t believe you actually got that,” but always follow it up with, “It is pretty awesome though.”
Somewhere along the line I parted with my childhood TMNT toys, which is a bummer because I would have loved to pass them on to my son. Do you have an action figure collection, and if so, is it original, the new line, or both?
I don’t have so much of a collection anymore, however, I do still have about five or six of the old original figures stored away.
Have any other crazy people snapped photos or otherwise commented on it?
Quite a few people have snapped pictures. I even stumbled upon a picture of it on Facebook on a random persons page once and was just like….. wait … that’s mine…. glad they liked it.
My favorite Ninja Turtle was Donatello because he was so stinkin’ smart and because the bo staff is an awesome weapon. Who was your favorite Ninja Turtle and why?
Growing up it was Leonardo. He was the leader, and well, he had not one – but TWO swords. Pretty badass in my opinion. As I got a little older, I grew more fond of Mikey.  He was more fun, always goofing off. But as I hit highschool and my adult years I grew more fond of Raph. He was darker, more gritty, especially in the first movie.
Do you watch the new cartoon series? If so, how do you like it?
I have seen a few episodes of it, and I like it. The CG leaves a little something to be desired because of the skinny form of all of them, but other than that I dig it. It is entertaining and still feels like the old turtles I used to know. But, for the love of god, keep Michael Bay away from the new movie plans. I am terrified to see what he is planning for the new movies. Teenage alien ninja turtles. Help us all! Look into that you will see what I mean.
Any last thoughts?
Just a big thank you. This was pretty cool. I hope your readers enjoy.
Thanks so much, Dan! Make sure you send us updated photos of any modifications when they come to fruition. As for the new movie, I don’t think there is any official word out yet. I, for one, certainly don’t mind them holding off until they can do it right, and besides, by that time my son may be old enough to see it with me!
Follow Secret Dad Society on WordPress.com