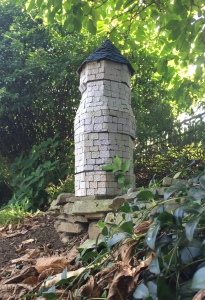 I recently started playing Hero Kids with my own little heros. Hero Kids is a role-playing game like  D&D (Dungeons and Dragons), but much less complicated and geared towards kids. They love it!

I bought a bundle of Hero Kids downloadable adventures via DriveThruRPG.com. I like that you can print out pre-designed maps and paper miniatures for all of the adventures, making game prep very easy. Sometimes I’ll color the printouts to give them an extra bit of zing, though it isn’t necessary.

After having a few sessions under our belts, I decided to create something personalized to play on besides the printed maps. The Wizard’s Tower adventure features a tower with three floors, so I decided to make a 3D, modular tower with stackable parts, complete with a rickety roof. 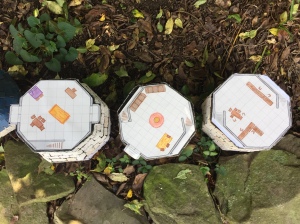 It started as a simple idea, but as usual, I very quickly got carried away.
I used Amazon boxes and lots of hot glue to make the main structure. The pieces were sized and shaped to the printable playing mats of the tower floors. 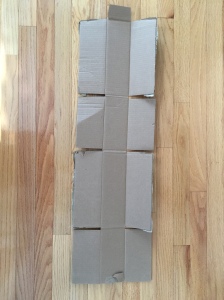 Save those Amazon boxes! 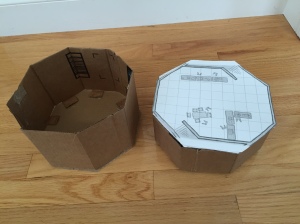 For the rickety roof, I used a cereal box, painted and cut up into small squares, and tiled over rafters comprised of heavily glued cardboard strips.

My favorite part of this project was making the stone walls. I blended a sludge of water and newspaper, drained off most of the water, and baked it into thin sheets, using this really cool method found here. I then cut the sheets into stone blocks and glued them all over the box with Aleene’s Tacky Glue. This was the most time consuming part, but I really like the way the stone walls turned out. 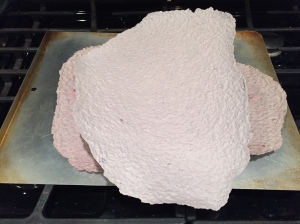 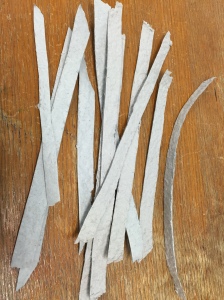 Finally, I painted the printable playing mats in watercolor and glued them to the tower pieces. I still have some finishing touches to add, such as balcony doors, railings, a crooked chimney, and a grand staircase, but my kids (and I) were really eager to play, so I postponed some of these details so we could finally begin to battle our way up to the top of the tower. I do plan to add them later for use in other adventures. I’m thinking that my little players will be become caretakers of the tower while the wizard is off wizarding somewhere.

Keep in mind you don’t need any special props to run Hero Kids, just some standard six-sided dice and downloadable content at DriveThruRPG. If you or your kids want an easy entry into the world of tabletop RPGs, then stop what you’re doing, download some content, and start an adventure! 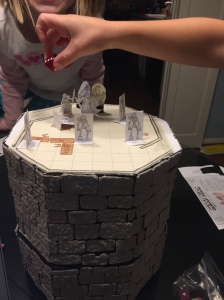 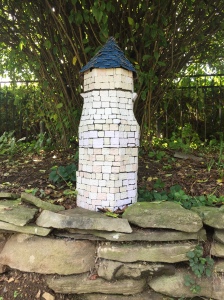 A kite messenger is a clever little device that slides up a kite string, releases a light payload, then slides back down to the bottom of the string for more fun. I made one with some cheap materials and finally found some windy days to test it out. Some kite messenger designs use sails to pull up the kite, but I’m starting out with a simpler design that uses toy parachutes to catch the wind. It can be made in just a few minutes using drinking straws, wire, tape, and a toy parachute.

Here’s how it works: The front loop of the wire hits a simple cardboard bumper attached high up on the line. As the wire stops, the rest of the unit continues forward, opening the middle section where the parachute is held. Once the parachute releases, the messenger slides right back down towards the spool of string, ready to be reloaded for more fun. 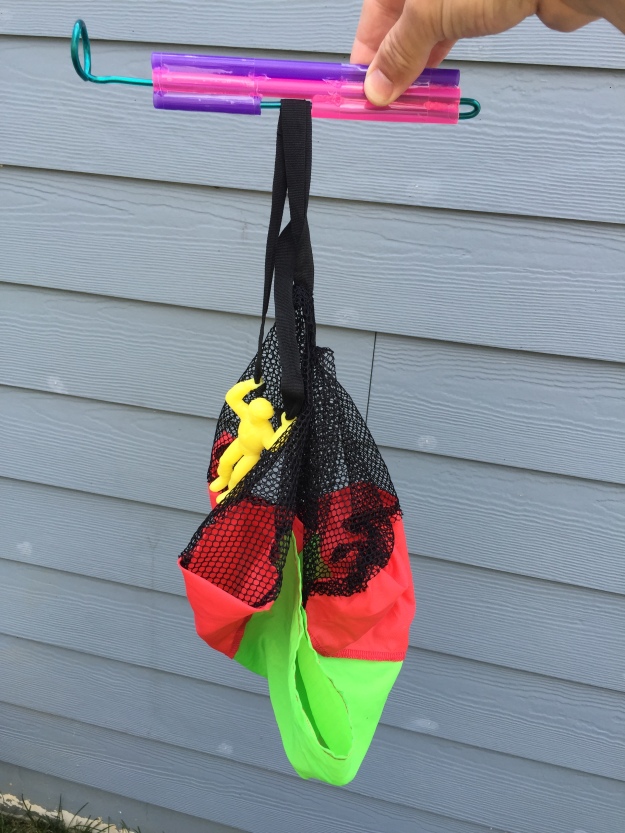 It’s fun to see the kid’s excitement build as they watch the messenger climb up the string, eagerly awaiting the parachute’s release so they can chase it down.

Here is a tutorial on how to build your own kite messenger. I used replacement Tervis straws that I purchased at Bed, Bath, and Beyond, because they’re much sturdier than your average soda straw. To hold it all together I used packing tape as well as a bit of super glue for good measure. The climb to the top of the kite line seemed to take a little long, so my next modification will be to use a much lighter gauge wire to reduce the overall weight. 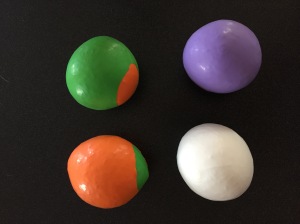 My kids are finally taking an interest in learning how to juggle. They’ve always loved throwing balls around whenever I practice, but they’ve never been interested in practicing the proper techniques until now. The problem is, my favorite juggling balls, the MMX Plus, are too heavy and large for their tiny hands. Instead of buying smaller balls or hacky sacks, I used plans from juggler.org to make several kid-friendly balls. This worked perfectly because I wanted to practice with them while their interest and excitement was high, and together we were able to crank out several balls in about 15 minutes. All you need to make your own juggling balls are balloons, tape, an empty water or soda bottle, and some filler (bird seed, sand, or rice). We used rice and the balls turned out great. Ok, kids, time to practice! 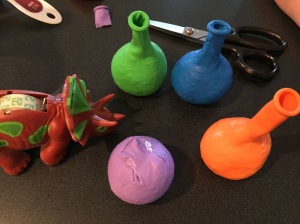 Sometimes being trapped indoors can inspire some great bouts of creative play. Last Saturday was one of those days. The temperature was in the negatives, a storm that locals were already calling the wrath of Elsa was headed our way, and we weren’t about to go anywhere. I was in need of some indoor activities to occupy both the kids and myself, so I turned to the ever-growing stash of cardboard paper towel and toilet paper tubes that I’ve been saving. There never has been a real plan for this pile of trash, but I clung to the idea that eventually I’d think of something fun to do with them. A marble wall run turned out to be the perfect idea for a day of inside play.

With a scant plan in place, we excitedly grabbed our cardboard tubes and painter’s tape and went to town securing tubes to the wall. The next time we try this, we’ll definitely start by sketching out a detailed plan on paper, but sometimes it’s just more fun to jump right in.

If you’re working with a combination of clumsy hands and walls that you’d rather not wreck, I suggest using FrogTape Delicate Surface. Its adhesion is not as great as other tape, but it won’t peel off your wall paint either. If you’re not too concerned with your wall’s well-being, then any painter’s tape should do the job.

In order to keep young minds interested, work backwards and be sure to do LOTS of testing each step of the way. We used a bell that came with a board game so we could hear a satisfying ding at the end of every successful run. If you don’t have a bell, try finding something else that makes a fun sound, like a toy xylophone or drum, or even a tin can.

The rest of the build is pretty straight forward and limited only by your imagination, although you won’t get very far without having to do some problem-solving.
For instance, we had to figure out how exactly to get the marble to drop from one tube into the next, something we initially overlooked. Cutting them in half lengthwise, like a half-pipe, made for a simple drop from chute to chute, but we found the tubes were much harder to tape to the wall that way. Instead, we cut out small notches for the marbles to pass through. We also had to plug the end of a few tubes to stop speeding marbles from launching out the other side.

You can go crazy with incorporating other light objects into the design. We thought about using some kitchen funnels but our marbles wouldn’t fit through the small holes, so we improvised with a plastic milk jug and styrofoam coffee cup. We ended up liking these recycled items way better.

At one point, while my son and I were playing, we noticed that my daughter had ditched us. I figured that she hit her limit and finally got bored with the project. I was wrong! As it turns out, she left to design her own marble run without any help! 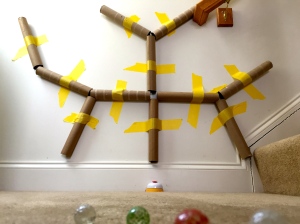 I love the design she came up with, and how she sometimes has to jiggle one of the tubes when a marble gets stuck. A little more tweaking should solve that problem. This was a super fun project, and I think would appeal to all ages. I sure had fun! If you try it, please send some pictures our way!

My daughter and I currently hold the world record for largest Dixie cup tower on RecordSetter.com. We unseated the previous record holder of 91 cups by stacking a 136 cup tower, only to blast it apart with our Nerf arsenal.  There are all sorts of records on RecordSetter.com, from the very serious to the downright bizarre. Examples include most catches juggling four balls while swimming, and most fiery bricks broken with one bare hand in 30 seconds while playing an electric guitar.

Anyone can create and upload a new record or challenge a current record. So what are you waiting for? Set your own record, or if you’d like, break ours!

In case you haven’t already heard, the Cardboard Keep met its fate this Halloween as its cardboard ramparts were razed and repurposed for an impromptu Dalek costume. Our epic cardboard battles had been put to an end. Though as fate would have it, our favorite castle wouldn’t be gone for long. My daughter and I had set out to tackle our very first Minecraft project, and while trying to decide what to create, she had the brilliant idea of building the Cardboard Keep. The walls are obviously no longer made of cardboard, but we decided to keep the name nonetheless. It took a few days and a whole lot of teamwork just to learn the ropes, but bit by bit, we got the job done. Oh, but we’re not actually finished. In fact, we’ve only just begun. The Cardboard Keep is just the centerpiece of our plans to create an ever-expanding world that we’re calling The Cardboard Realm. The name may not make any sense in the world of Minecraft, but it makes this father and daughter duo happy.