Sometimes being trapped indoors can inspire some great bouts of creative play. Last Saturday was one of those days. The temperature was in the negatives, a storm that locals were already calling the wrath of Elsa was headed our way, and we weren’t about to go anywhere. I was in need of some indoor activities to occupy both the kids and myself, so I turned to the ever-growing stash of cardboard paper towel and toilet paper tubes that I’ve been saving. There never has been a real plan for this pile of trash, but I clung to the idea that eventually I’d think of something fun to do with them. A marble wall run turned out to be the perfect idea for a day of inside play. 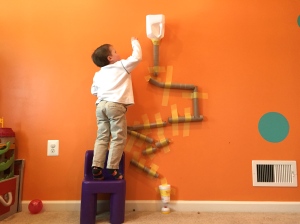 With a scant plan in place, we excitedly grabbed our cardboard tubes and painter’s tape and went to town securing tubes to the wall. The next time we try this, we’ll definitely start by sketching out a detailed plan on paper, but sometimes it’s just more fun to jump right in.

If you’re working with a combination of clumsy hands and walls that you’d rather not wreck, I suggest using FrogTape Delicate Surface. Its adhesion is not as great as other tape, but it won’t peel off your wall paint either. If you’re not too concerned with your wall’s well-being, then any painter’s tape should do the job.

In order to keep young minds interested, work backwards and be sure to do LOTS of testing each step of the way. We used a bell that came with a board game so we could hear a satisfying ding at the end of every successful run. If you don’t have a bell, try finding something else that makes a fun sound, like a toy xylophone or drum, or even a tin can.

The rest of the build is pretty straight forward and limited only by your imagination, although you won’t get very far without having to do some problem-solving.
For instance, we had to figure out how exactly to get the marble to drop from one tube into the next, something we initially overlooked. Cutting them in half lengthwise, like a half-pipe, made for a simple drop from chute to chute, but we found the tubes were much harder to tape to the wall that way. Instead, we cut out small notches for the marbles to pass through. We also had to plug the end of a few tubes to stop speeding marbles from launching out the other side.

You can go crazy with incorporating other light objects into the design. We thought about using some kitchen funnels but our marbles wouldn’t fit through the small holes, so we improvised with a plastic milk jug and styrofoam coffee cup. We ended up liking these recycled items way better.

At one point, while my son and I were playing, we noticed that my daughter had ditched us. I figured that she hit her limit and finally got bored with the project. I was wrong! As it turns out, she left to design her own marble run without any help!

I love the design she came up with, and how she sometimes has to jiggle one of the tubes when a marble gets stuck. A little more tweaking should solve that problem. This was a super fun project, and I think would appeal to all ages. I sure had fun! If you try it, please send some pictures our way!

1 thought on “Make a Wall Marble Run from Trash”