This is my first update on my Doctor Who scarf project. It turns out that you can’t just sit down for the very first time and expect to start knitting. I’m not sure who gave me that idea, but whoever it was, they were grossly misinformed. Like most things, there is a learning curve involved.  You have to practice first and acquire an adequate base skill level, figuring out what works, making mistakes, fixing mistakes, all while struggling to develop a natural rhythm and the necessary muscle memory. I learned this lesson right off the bat. 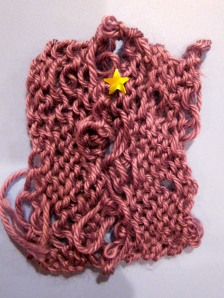 That being said, I am currently a knitter in training, working on my craft with intensity whenever I can grab a few spare minutes. You could equate such training to Rocky Balboa prepping for his mammoth fight against Ivan Drago, except that I am actually Russian…so, flip it. Never mind, it was a bad analogy anyway.

I started on size 10.5 needles and after a few failed attempts, I actually started to become fairly comfortable. 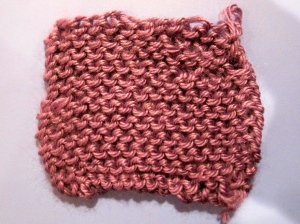 See, getting much better!

I just moved to the suggested size 8 needles as indicated in the book.

Size 8. That hole is intentional. It serves to anchor the piece.

I’d like to actually start knitting by December 1st, a nice and neat date. I’ll need a little more practice with the size 8 chopsticks (sounds better than needles, eh?), then I’ll need to figure out how in the world to change colors on the fly. Yikes, better get back to training…