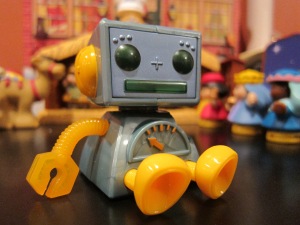 The other day I was pulling out some christmas decorations in the basement, and when I leaned on an old lamp, the base of it just completely broke apart and I nearly went headlong over it. Don’t worry, I escaped unscathed and live to tell the story.  I was about to take it out to the trash when I realized I may be able to salvage some parts. I’ve been wanting to build my kids homemade robots for some time now, but I never seem to  have  enough materials lying around to work with. Even though the lamp is a good start, I’m still going to need a lot more parts, so I’m dedicating a box in the basement for random robot parts, and whenever I come across something I think may be useful, I’ll just toss in the box. Hopefully, I’ll look in that box someday after amassing enough random roboty junk, and I’ll be struck with inspiration to build the perfect robots for my kids. Better than Wall-E and Number 5! (Notice that I set the bar much lower than R2D2 and 3CPO, ’cause they’re the best!)