I found this Tattoo a Banana video by multimedia artist Phil Hansen, and I couldn’t wait to try it out. All you really need to do this is a banana, a thumb tack, and some imagination. My daughter did some ABC’s and stars on a large banana and also chose to tattoo a butterfly on a cute little baby banana.

I waited until the kids were in bed to start on my C3PO banana tattoo. That way I could work uninterrupted. I made the mistake of trying to work on the backside of the banana, which meant I had to constantly turn it and also hold it steady for an eternity with my left hand. As I should have guessed, my hand started cramping up after a short while. Then my phone (which I was using as my time-lapse camera) began ringing, so I conveniently took this as I sign to bail on C3PO and start fresh. 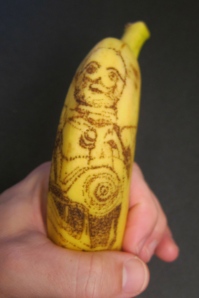 For my second attempt, I made sure to lay the banana down flat on its side and I picked something  less complicated: Curious George peeling a banana with a tattoo of himself holding a banana, and on that banana….uh, you get the idea.

This is the first of many projects in Phil Hansen’s book, Tattoo a Banana: And Other Ways to Turn Anything and Everything Into Art. It sounds awesome and you can bet that I’ll be picking up a copy!