Looking for just the right Yule log video for that magical holiday ambiance? Look no further! Your pets will thank you.

This past weekend we stopped by Bass Pro Shops (the kids call it the “fishy store”) on a whim and were pleasantly surprised to find Santa’s Wonderland open for business. This seasonal event wasn’t on our radar when we decided to stop in, so it was a bonus for the kids. Santa’s Wonderland is an activity-packed event located inside Bass Pro Shops. It’s open now through December 24th, AND, it’s free!

Some of the activities featured at our location included:

The only thing we didn’t have time for was the photo with Santa. The line was long, and we felt it a bit early in the season for a Santa photo, and most importantly, it gives us a reason to come back again soon. 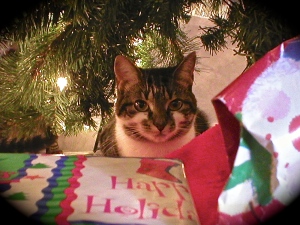 Enjoy the seasonal sounds of my kids meow meow meowing in the car to the tune of Jingle Bells.  Happy Holidays everyone! 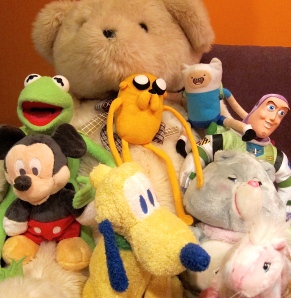 ‘Tis the season’ for giving, and for being completely humbled by your own children.

We were going through the mountain of toys and stuffed animals that have amassed in the playroom, and we decided to clean out some of the clutter. The collection of stuffed animals, specifically, was squarely in my sights.

I said to my daughter, “We should give a few of these to another boy or girl to play with,” and just after the words flitted happily off my tongue, I realized what I had done. Four-year olds, as you know, take EVERYTHING literally.

I saw her eyes begin to grow wider and imagined the gears turning in her head, so I commenced with my back-peddling crusade. I tried to explain what it means to donate things to the Salvation Army, but it was already too late. She was dead set on going right out and finding a boy or girl to give her stuffed turtle and teddy bear to.

Although there were lots of boys and girls at the mall shopping with their parents, we must have done five laps before she worked up her confidence and settled on the perfect girl to pawn off her old stuffed animals on. “Great,” I thought, “This is almost a wrap. Soon I can put another notch on my rad dad staff.” (I don’t really have a rad dad staff – see, I’ve become paranoid about being taken literally).

I bent over, smiled at my daughter, and said, “Go ahead, sweetie. Run over there and give them to the girl,” after which she completely froze. I tried encouraging her to no avail. She wanted to do it, but couldn’t work up the nerve. I could totally understand where she was coming from. That was when I came to the realization that I was going to have to do this myself. My gut instinct was to run. Instead, I took a few deep breaths and tried to think.

“Okay, I can do this!” I thought. I looked at the mother, who, as far as I could tell, appeared to be a decent and friendly person. I then looked down at myself. I was sporting my best pair of corduroys. OK, that’s good. No foods stains either, that’s also a plus. The best thing I had going for me, however, was having my daughter with me. That would have to lower my creepiness value significantly.

That’s when my brain began to riot against this dumb idea. Every ounce of me revolted against approaching this total stranger. I’d much rather be anonymous, so instead I briefly considered giving my daughter some cash to drop into the Salvation Army bucket out front, but I knew it couldn’t work. She just wouldn’t understand. No, I had to go all-in now.

I paced back and forth a few times, (you know, just to look even creepier to nearby shoppers) and then I made my move. I gripped my daughter’s hand tightly, not only for her support, but also in an effort to look less threatening. We were in this together.

I smiled and said, “Excuse me, but my daughter really wants to give away these stuffed animals to someone, and she chose your daughter. It really would make my daughter’s day.”

I then turned slowly to my daughter and said, “Open the bag, honey,” to show that it contained no rat poison, body parts, or other nightmarish items – just two cute and cuddly stuffed animals. I smiled again and waited patiently as the mom sized up the situation.

She started to say, “Well, she already has – ,” but I deftly and ever so subtly shook my head, raised my eyebrows as high as my face would allow, and tried to nonverbally communicate something along the lines of, “Dear God lady, please please please don’t make me have to do this again – you’ve got to help me. Just take the $%^&* bag of stuffed animals, have a Merry Christmas, and let’s move on!”

Just then her daughter said, “OOHHH, they are so cute!”, and my own daughter began doing that cute thing she does where she sort of dances in place because she’s so excited, shy, or in this case, both.

So the mom says, “Are you sure?”, and I volleyed back an immediate “Yyyy-ep!” Then Mother went on to say that it was very nice of her and all that jazz… Actually, my brain stopped processing outside stimuli at that point as my inner monologue began screaming, “WE DID IT! WE DID IT!”

After a quick goodbye and well-wishing for Happy Holidays, we went our separate ways, and I wiped the sweat from my brow. I gushed to my daughter about how proud I was of her for giving away some of her toys, and I offered to take her out to eat as a special treat. She chose the ‘dinosaur place’, which baffled me at first, but turned out to be the Texas Roadhouse right outside the mall. We had a great dinner and a discussion about the ‘fun’ we had giving away her toys and making another little girl happy.

I’m sure these sorts of things happen all the time, but this one really is going to stick in my mind for quite some time. It’s easily going to be my defining ‘dad moment’ of the year. Nothing else in the world could have given me courage to approach a complete stranger in such a manner, except for wanting to do right by my daughter. Both of us grew a little bit as human beings that night.

He’s arrived! Mr. Fox’s long and treacherous journey across the U.S. has come to an end, and now the old gang is together once again. May the adventures begin!

My wife and I don’t spend too much on Christmas decorations since we’ve already inherited a ton of stuff from our families. One thing that neither of us had, however, was a real advent calendar that our kids could grow up with. We finally bit the bullet and invested in an extremely nice wooden one from Byers’ Choice (the “Christmas House” model).  The artwork is gorgeous and it has many compartments of varying size to conceal candy or other tiny treasures. 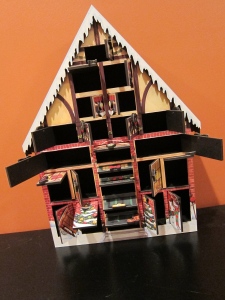 As a child, I inadvertently sabotaged my own Advent calendar tradition. The chocolates in those cheap cardboard calendars that my parents bought every year weren’t individually wrapped, so by mid-December, they too tasted like cheap cardboard. That’s all good if you actually like your chocolate to have notes of cotton and chalk while maintaining the texture of old sawdust, but I was a tad picky. In an effort to work the system, I adapted to the situation I was given by gorging myself on the entire calendar on the very first day it was presented to me…and that was the demise of yet another family tradition. My new calendar, however, has a failsafe – I actually control the contents! “Look kids, Snickers bars, hoorah!” Or, “What? You don’t want to brush your teeth tonight? That’s ok honey bear. Now, let’s see what’s behind door number four. Oh my, a sample size bar of wild orchid scented soap!”

Even though I’ve seen some really cool new advent calendars on the market (Lego has some sweet ones – why didn’t they make them when I was a kid?), I am quite happy with our one-time investment of a family keepsake, and I fully welcome the challenge of finding fun candy and gifts to fill it with. Although, it’s not too late to snatch up one of those Lego Star Wars Advent calendars all for myself.

I’d love to hear any advent calendar anecdotes of your own!